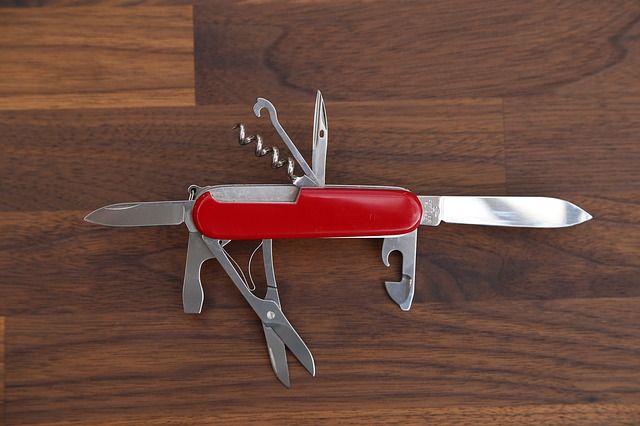 When it comes to a pocket knife that you will be carrying around every day, knowing the types of Pocket knife blades available will help you to know the kind of knife you have. Whether you are purchasing a single-blade pocket knife or multiple blade model, it is vital to know the blade types, the uses, some of the advantages and the disadvantages.

Pocket knives can be classified according to these factors

According To The Type Of Edge Of The Blade

Knives can be classified according to the serration present on the edge. E.g., we have the fully serrated, partially serrated or plain. Some knives can be greatly serrated.

The plain knife is useful to make cuts throughout the day. Although it doesn’t perform well on wood or rope, it is excellent at things like shaving and skinning animals.

The general belief is that a pocket knife with a plain edge is better at performing push cuts. Also, a single sharp edge allows one to have better control, accuracy is also increased and gives cleaner cuts. An added advantage that the plain edge knife can be easily sharpened without necessarily sending it back to the factory for sharpening

A major disadvantage is that the plain edge cannot perform push cuts. The way you can slice a tomato smoothly, you can’t use the plain edge to slice object that requires sawing motions effectively.

This type of knife is suitable for hard cutting and sawing. Although, it has certain limitations. For instance, a fully serrated blade can only be used for specific situations.

A fully serrated knife can perform cutting functions that involve sawing motion. It does a better job at cutting tougher materials. This is because additional strength comes from the higher pressure per area due to the serrations.  The serrations are thinner which allows them to cut better than plain edge knives

This knife fights some of the negative values of the serrated edges but allows you to keep the sawing ability on the knife.

A partially serrated edge is the mixture of both the plain and serrated blades. The combo edge is more popular because it allows you to use part of the knife to push cuts and the other part for vigorous cutting.

The combo edge has some disadvantages of a serrated edge like sharpening difficulties, but the clumsy aspect of the serrated knife is treated by the plain knife.

According To The Number Of Blades:

Based on the number of blades, pocket knives can be classified into a single blade and multiple blades

These types of knives come in different shapes and sizes, but their simplicity and qualities vary. The blade design focuses on just one type of blade. Their locking mechanism makes them stronger for a more demanding tasks. They could also have an opening which allows then to pop open once pressed. They are easier to maintain, and they don’t break easily.

This is the most common type of pocket knife blade. One side of the blade is sharp, and is curved up to a point. The other side is flat and dropped to that point. The drop point blade is a general-purpose blade and it is ideal for control and strength. The drop point pocket knife has a straight spine until it gets near the tip. As you get closer to the tip, the spine slopes down to meet the blade at that sharp point.

This is a type of knife popular in japan. It is seen on many tactical folding knives.      Most times, they are thicker than most pocket knife blades with an angular point. This knife is useful for stabbing and piercing materials.

There are different knives for different purposes. Having a multiple blades pocket knife helps to select the right knife for the right job immediately . Multiple blades knives are very versatile and convenient. Easy to carry about and has a lot of widgets installed in a single handle.

The pen blade is a small blade, which is not very sharp. It comes in handy and useful for tasks that require delicate work.

The sheep foot blade was designed to help shepherds trim the hooves of sheep. It has a straight dull back that curves towards the edge of the tip. The cutting g edge of the blade is straight, and this provides a large cutting surface. This kind of blade is also popular among whittlers.

The spey head is designed to castrate and spay herd animals. It was originally called spay, but it got turned to ‘spey’. The spey blade has a single sharp straighten edge that curves upwards to meet a short, dull point. Spey blades could be long or short. On tappers, they tend to be long; on stockman knives, they tend to be short.

The Barlow knife was created by a guy called Barlow. The knife has an elongated oval handle and basically a clip point and a pen blade.

The camper knife is most useful for campers. Someone is a boy scout would have owned one. Despite the fact that the camper knife has different knives, it also has various tools which can be used outdoors. E.g. an opener, scissors, school driver, etc. it is a multi-tool pocket knife.

According To Blade Lenth:

These knives are lightweight and suitable for daily tasks, especially if the knife is used for basic tasks around the house like cutting or opening packets. They are compliant with the law.

Knives with blades 2.75 inches and shorter have a number of benefits. Small pocket knives are acceptable and legal everywhere. Having a pocket knife of this size or smaller ensures you are law compliant.

The downside of small blades is that they are not as versatile as larger blades. They are prone to failure during extreme use because their blades are often slip joint so that they won’t lock into place when cutting.

Blades within this range fall within the right range of blade length. This is because it is small enough to be carried around it is large enough to handle bigger tasks. Blades of this length have. Medium blades are ideal for any tasks – from small things to the heavy-duty.

They can handle bigger tasks and comfortable to carry around.

Some laws can place a ban on medium-sized blades because they are a bit larger than 2.75 inches.

Unlike the small and medium blades, a large pocket knife is not a practical everyday knife

This category is larger than 4 inches. It has a lot of advantages over the fixed blade knives, but it is much easier to carry discreetly. Large pocket knives are mostly used for self-defense purpose.

These blades are much heavier.

These classifications will be of great help when you are purchasing your next pocket knife.

KnifeCube is a blog about Knife, Knife Tips and various activities based on knifes like chef knife, fish fillet knife, pocket knife and your go-to resources!

Scroll back to top